Being able to run with a stroller can be a lifesaver when you’re getting a bit stir-crazy or child-sleep isn’t a happening thing. Here are some tips and observations.

1 – Get a good running stroller. Ok, that’s kind of a no-brainer. But some people have strollers that are fine for walking but awkward for running – perhaps a bit heavy or difficult to turn. This puts them off from the start, meaning they miss out on all the fun. If you’re wanting to run regularly, it’s well worth picking up a second-hand model that’s nice to use. I’m very fond of our well-used Mountain Buggy Urban but there seem to be loads of good options, including some with big speedy wheels. Try before you buy.

2 – Take snacks and distractions and get used to multitasking. However, this is good ultramarathon training. After you’ve distributed crackers and sung The Wheels on The Bus 10 times while negotiating pavement bumps and keeping your steps light, opening and consuming a gel in peace and quiet mid-race becomes a breeze.

3 – Pump up the tyres, and check them regularly.

4 – Push with one hand, and focus on form. (If you can’t run while pushing the stroller with one hand, see tip 1.) Obviously two hands are good for hills and delicate steering and such, but I find that gripping with both hands on flat paths is a sign I’m too tense and probably at a weird angle bending forward. You’re going for high cadence and low effort. This might mean almost jogging on the spot on occasion but it’s comfortable in the long run (so to speak).

6 – Go slow at first, nice and relaxed and slow. Easy pace means fun. Don’t expect to maintain a no-buggy per-km rate just yet. (Unless you’re crazy fast. Having said that, Lance Brew has been breaking spirits at Hamilton’s Eastside 5k too with his sub-20 efforts – wonder if he’ll slow down when he acquires two new additions? A triple buggy may be required.)

8 – Make it a sweet ride. I put Alba’s old moses basket mattress in her stroller so it’s pretty snug and conducive to sleeping. Hooray for buggy sleeps and sane parents.

9 – Run to do errands. A bonus of running with a stroller is that you can take plenty of stuff, like a full change of clothes.

10 – Remember other people are around when talking to your child. See below. True story. 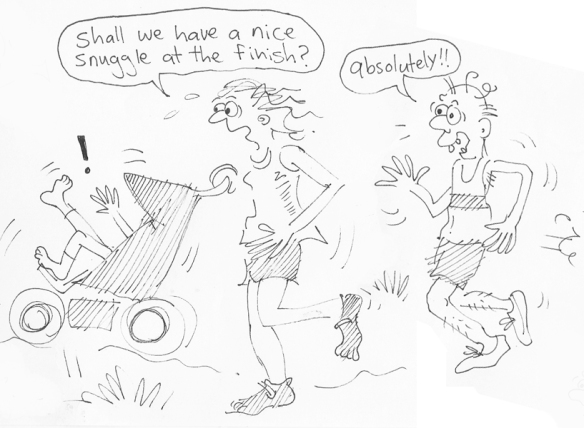 Motherhood has curtailed reading time a tad but here are a few running books I enjoyed at the end of last year. Further recommendations are most welcome.

Eat and Run – Scott Jurek
Ok, I’ll say it right off – I like Eat and Run a lot and decided quickly that it was one I wanted to own. It mixes an engaging life story with great insights and advice, and includes delicious recipes at the end of each chapter. Somehow, I came out totally wanting to be vegan. Although that urge remains in the realms of vegan-curious for now, this aspirational quality permeates the book’s titular focus. It’s essentially about running smart and eating smart, and makes a pretty solid case for both.

Jurek had a difficult childhood, stumbled into ultras sort of by accident and then proceeded to carve up Western States and many other ultramarathons repeatedly. He’s a serious and inventive vegan, and makes the best case for a plant-based diet I’ve read. The recipes were one of the convincing factors in buying the book, as I kept going back to them. They can be frustrating initially if your pantry is as ordinary as mine – damn it, we’re all out of sprouted sorghum and mesquite powder! – but stand up well to substitution. Mostly. I made vegan gluten-free pancakes out of scraps I found and they had structural integrity issues, but tasted good. My favourite is still the chocolate adzuki bean bars.

The running stories and advice are excellent and make me want to do back-to-back-to-backs up mountain ranges. Alba might not approve though. She rates this book due to its photos, despite their somewhat repetitive nature. (‘Man running!’ ‘Man and dog running!’ ‘Man running on mountain!’ ‘Lady running!’ No, still the man – oh sure, whatever.)

Just a little run around the world – Rosie Swale-Pope
This one’s been around a couple of years now but hadn’t made it into my frame of reference. It’s also highly inspiring. I might have to slow up on the inspiring books while I have a young child, as she probably wouldn’t appreciate me dashing off to run across continents and take on wolves either. Perhaps I could just run to Raglan for now.

The gist is in the title – after losing her beloved husband, Rosie Swale-Pope runs around the world over five years raising money for charity, taking what she needs with her. Her style is relaxed and humble while the stories are often mind-boggling. Insane coldness, wolves, a naked gunman and frostbite all feature. It’s a phenomenal expedition, really, related with humour and honesty.

In a sense it’s a great contrast to read next to Eat and Run due to the simplicity of Swale-Pope’s diet – she’s often on 1/3 cup of buckwheat groats per meal (damn pantry, we’re all out of buckwheat groats too). They would agree on the central place eating and running take in life though. Perhaps the sentiment that resonated most for me was her musings on just how much we can really do without.

So I didn’t buy her book, but I liked it whole lot.

Keep on Running: the highs and lows of a marathon addict – Phil Hewitt
The trouble with reading about Jurek and Swale-Pope is that most running books will consequently suffer in comparison. This book is light and likeable enough – a rundown of one average UK guy’s discovery of marathons and his subsequent 42.2k experiences – but lacked a bit of pizzaz for me just due to being narrower in scope and following a less dynamic character.

It’s written well though, as Hewitt is a journalist, and prompts some wistful envy of just how many interesting marathons are a day away when you’re in Europe. It would make good research for anyone considering a European marathon, as he reports on a fair few in detail. He didn’t enjoy Paris as much as I did but did also note the public pee-fest at the start.

Embarrassing runner’s admission – it kept me reading partially to see whether his PB would get below mine (no, not quite). If you particularly like marathons, this is a worthy read. If you prefer ultras and weird stuff instead at this point in time, by all means give it a go. Just don’t expect anything transcendent.

Running to Extremes – Lisa Tamati
I found Running to Extremes a good enjoyable yarn. Tamati’s first book had a wider autobiographical focus whereas this has a straightforward approach – several detailed race/run reports of interesting adventures plus thoughts on various aspects of ultrarunning – and this simplicity works well. It was nice to have a New Zealand perspective in the mix while I was on this ultra-masochism-book kick.

There’s a certain fascination in reading about the intricacies of intense multi-day expeditions such as the Gobi March and how tough, and sometimes dangerous, they can be. Unlike some of Jurek’s and to a degree Swale-Pope’s experiences/events, I’m not drawn to emulate the hot long stuff yet. As Alba would say, maybe soon, maybe later.

Some of the running advice was aimed more at newer runners but I found some of Tamati’s observations timely, including the need to be careful with adrenal recovery and how easy it is to get sick slightly after an intense event.