“The field at Tarawera is AMAZING this year. I’d almost rather watch the race than run in it.”

Talk about being careful what you wish for. I uttered this glib statement several times during training for the 2013 Vibram Tarawera Ultramarathon. The first part is true enough – here’s the men, and naw, I even snuck in at the bottom of the women’s – but the second isn’t so much. I entered the 100k race around July, meaning I have been looking forward to it for seven months. Build up to Kauri 70k, run lots over summer and come in properly fit this year, went the plan.

The friendly atmosphere and meeting new people was a highlight of the training camp.

This plan went well until two weeks ago. Really well, considering, although of course I’d been complaining it wasn’t enough. Kauri was great. 2013 brought semi-consistent 100k weeks and solid long runs, notably a very enjoyable 60k with fellow Tarawerans at Lake Ngaroto, a double ascent of Te Aroha, finally ticking ‘run to Raglan’ off the bucket list, and Mal’s excellent training camp. I even got my iron levels soaring into the normal zone.

So it was all going just dandy until an innocent 5k buggy run brought it crashing down. That achilles is unusually sore, I mused, stepping on a wonky brick during the last kilometre. Ooh look, we’re on track for a buggy PB. Sprint!

I got the buggy PB – 22 minutes and some change – and lost the 100k. Didn’t know that at the time though, so I ran and hobbled us another 5k home. From there my hopes and progress looked a bit like the revised Tarawera elevation chart.

*”This seems to be a proper injury. There’s three weeks to go though! Heaps of time.”

*”This still really hurts.” Sulk and eat almond butter with a spoon. 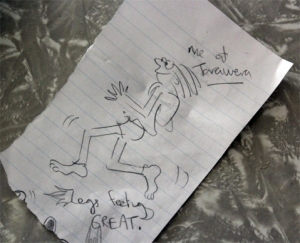 *Feels a bit better! Maybe I can make it. I WILL make it. Think positive and spend money, ordering all my gels for the race and some new shorts. Draw quick picture depicting my awesome healthy legs and put it by my computer – that can’t fail to work.

*Race course gets changed due to fire risk, so I’ve covered the distance before. Slight consolation, except I still really want to run it.

*Wait two more days. Jog for 40 minutes, with minimal pain. I love running! Running is awesome! I’m going to be all healthy and fresh for Tarawera.

*Figure I should test out running for an hour if I’m going to be running for 12 or 13, so I try it, nice and slow, on grass, followed by an aquajog. Screw you, says the ungrateful achilles and transforms into a sore spongy mango-like shape.

It was downhill from there, really. With help, I slowly talked myself into letting the 100k go and doing the relay – only 38k! This was a good intermediate step. After work yesterday, the physio said the injury was as bad as it had been initially and implied that while I might get to the end of 38k, any running was a dumb idea in regards to

Being a good sport in recovery

future endeavours and the speed of healing. So, bye bye Tarawera. That’s ok, I thought. It’s just a race. There’ll be more. This faux-zen exterior revealed itself as pure denial as I set off biking home, got a huge lump in my throat and pretty much bawled. (You can kinda get away with that on a bike.)

Kids are cool for perspective though, aren’t they? After an extra lap or so round the block to calm down I got back. Mummy! said Alba, sprinting up (with her lovely undamaged achilles). Did you have a good day at work? Can we lie down in your bedroom and have some milk? And pretty much just like that I felt ok again. Rich chocolate ice cream helped, and the massage that was booked ahead to get me ready for the race. I have to make more almond butter, because Alba’s started eating it by the spoon too.

It still sucks when you can’t do something you’ve been building up to for ages. It will be bittersweet seeing everyone run away in a surge of adrenaline on Saturday at 6.30am, and I get a slight envious ache at seeing all the fully-warranted excitement on the Facebook group. My gels and shorts arrived this morning.

Ultimately though, it’s not that important. It’s a peculiarly niche issue, not being able to run an ultra, and would pale beside family health issues or anything like that. I’ll be back.

As I’ve said, the field at Tarawera is AMAZING this year, and there’re worse things in the world than watching a world-class ultra. After being out for ages Ruby Muir knows all about lame injuries, which must be doubly frustrating when you’re phenomenally fast. I think she’s going to smash it. It will be cool to cheer, especially my lovely running mates Jenni and Oscar and Brian, and the Barefoot Inc athletes, and everyone, really. Go hard and treasure the opportunity.