I ran Cambridge Half Marathon last Sunday and scored a PB – admittedly a soft one, but notable for providing the first Post-Baby Personal-Best. There are hopefully more coming. Hear that 5k? You’re going down.

So it rained at the race. Everyone stood around soggily under eaves, reluctant to take off protective clothing. I knew I’d warm up quickly though, and did. Cue a relaxed start, complete with banter and sandbagging. Several of us settled into a comfortable group around the 4k mark. 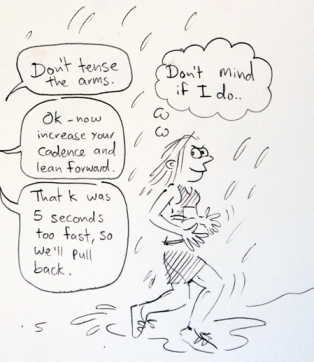 Hadley was supporting Shanel to do 1.33. I’d been thinking 1.35 – 1.38 would be fine given minimal long runs, but when he mentioned that goal it sparked a ‘maybe..’ in my mind. The pace was feeling right and we trucked along consistently for the next 10k. Hadley seemed to be a terrific pacer, incidentally. It felt almost sneaky having good advice intended for someone else drifting forward on the wind, but hey, I’m not fussy.

A consistent time trial was always the aim and that held together – no super surge at 15k but no great drop-off either. It was good to meet some 10k-ers to spur the legs on, especially Oscar. I felt heavy-legged in the last 2k or so and probably slowed up, but got there in 1.32.45. Hooray! Lots of PBs on the day, including Sandra carving a mighty 4 minutes off her 10k time.

I zipped home, got small girl to sleep, and proceeded to squander a lot of time – probably almost 1 hour 32 minutes 45 seconds – trying to find out whether I had in fact done a PB. Sad. Why couldn’t the advanced technology of Gmail find “results from that fun half marathon in Rotorua where I won a bike a few years ago”, I wondered? But the nostalgia-hit of old Hawks newsletters was pretty fun.

I’d pretty much given up when Jacqui helpfully recommended athlinks.com and bam, there it was. 1.32.58 at the 2009 Rotorua Forest Half. Sweet, one soft PB thanks. (Passing thought – you could do some great athlete-stalking on that site).

To backtrack on the glacial-paced achilles recovery front, I’ve having my first experience of acupuncture. It had somehow passed me by entirely that you can have a course of acupuncture as well as a course of physio under ACC. I only found out when Vegan Buffet happened to give me a $20 voucher (hooray) towards some acupuncture, which turned out to cost $115 a session (argh), unless you can bring in an ACC number next time for a big subsidy (hooray!). Although it’s on the other side of town (argh) but could help (hooray).

Turning up to have multiple needles wiggled around in my delicate wrist in order to fix my achilles (go figure) isn’t that much fun in practice but it’s worth a try. So far my enduring impression is of Alba relentlessly trying to feed me her snot while I’m needled and thus immobilised. Charming child. She calls the visits ‘the akka punch’ which sounds like a knockout martial arts move, and is entranced by the nearby Bin Inn because it has a budgie.