It turns out my comment about not entering any ultras for at least two months after the NZ 100k champs was a complete lie. Sorry, limbs. Encore une fois? (Wow, sudden late ’90s dance music flashback.)

For anyone who missed it, my 100k race report is over at Backcountry Runner. Short version: it went well, despite an overenthusiastic start. I ran 2k 50 times and got a PB and a cup. Also a drink bottle with a fabric handle, which Alba declared the best prize of all.

Since then, I’ve been a bit droopy and done not much. The hundy smashed my quads and energy reserves a lot more than Tarawera, maybe due to the surface, the speed and the extra 30k. I keep getting cajoling emails from the High50 Vertical Challenge who can’t comprehend my slackness, saying they see that I haven’t updated my Vertical Challenge log for some time now and what am I, some kind of crybaby flatlander wimp? The body’s creeping back into action though. I’m going to be a pacer for the first time at Huntly Half on Sunday and am more nervous about that than I would be taking part (responsibility!)

Also, I have been invited to an international race, which happens in three weeks. I’m quite excited about this. 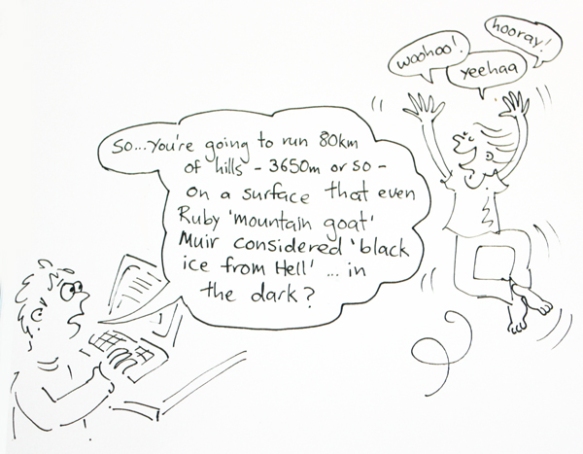 The event is the Ultra-Trail Des Cagous in New Caledonia on June 7th – ‘a pedestrian running of lowmountain range in semi autonomy organized by Nouvelle-Caledonie Aventure’. Take a moment and read Ruby’s report of the 53k version from last year, which she carved up as per usual despite running 7k extra and basically having to ski. This year Ruby is preparing to smash UTMB instead, sensibly forgoing the UTDC jaunt. Thus, I get to carry the torch, with trepidation and gratitude. It looks fairly epic. Jungle running in a new country! 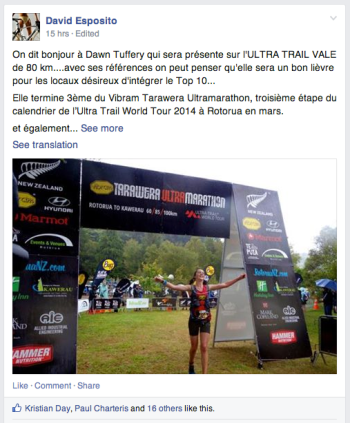 I’m used to being a tortoise, not a lièvre

Aspects of the description are slightly unnerving:

‘Every competitor can be submitted to a dope test, hanging and upon the arrival of the event.’ I’m fine with a drug test, but not sure about the hanging..

Anyway, it should be a grand adventure. I have an excuse to scatter arbitrary school French phrases around with abandon. There’s no time to train as such, so I’ll be going directly from recovery into taper. The level of elevation gain is new. I’m not going in completely green though – I did Cambridge Cross Country on Saturday, which had 4 metres, so it’s only another 3646 than that.

Deluded? Never! I’m off to the doctor today to be certified of sound body and mind. Wish me bonne chance.

3 thoughts on “What’s next: deuxième partie”