Mention the idea of running 100k in flat concrete 2k laps to an acquaintance, and they’ll look at you somewhat bemused. Even otherwise-hardcore runners don’t tend to get excited by the idea. No mountains, no soft trail, no point-to-point = no point?

The intrinsic pointlessness is part of the charm. It’s hard to explain, but the simplicity of the loop setup makes the body-mind challenge of the game more stark and intriguing. Today you traverse this (flat, concrete, FAR) distance. Don’t worry about carrying gear or getting lost or negotiating hills. It’s purely about maths, motivation and mind games, as well as camaraderie and courage.

Since dipping my toe into the ultra realm in 2010, I’ve felt weirdly drawn to the 100k road champs when they come around. Last year I was out due to fatigue and injury (more on that in a coming post), and this year I was unsure I had the fitness. Respecting the distance to me means averaging some 100k training week blocks in the leadup. I’d been doing 60-70 at a moderate pace, and Christchurch is a long way to go. April came and the decision had to be made.

Three weeks out, I set off in the dark for a make-or-break 10 laps of Lake Ngaroto (60k). If I could average 5 minutes/k, I’d take a punt on the champs. If I blew up, or was lots slower, I wouldn’t. In short, I held the pace for marathon distance and gradually deteriorated for the last 18k, but the average was acceptable. Talking to some encouraging adventurous people later that day sealed the deal (peer pressure works). I booked the flights. 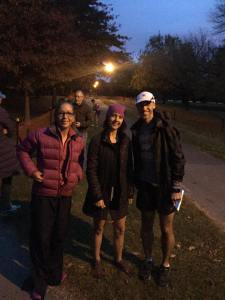 Let’s do this! Photo: Shannon-Leigh

On May 1st at 6am, I walked into Hagley Park listening to ‘Heroes’ and joined a small brave band of ultrarunners congregating in the dark. It’s a modest field, spread over 50k, 50 mile, 100k, and 100k relay events, with two men and three women in the Athletics NZ championship category. “Odds of a podium spot seem good,” joked Phil Costley, as we picked up our numbers. Trouble is, you still have to run a fair way to that podium. 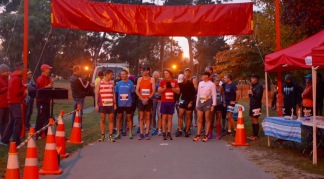 After all the wondering and waiting and travelling, it was a relief to stand on the startline and set off. You soon get to know people along the way while passing and getting passed. It was fun to see the speedy Phil taking on his first 100k (he holds 32 or so NZ titles from 1500m up). Every 10k he’d lap me and chat for a moment, and I’d have a go at emulating his smooth running form for a few hundred metres.

The first 40k or so of 100k is pretty fun, by necessity. You’re running within yourself and enjoying the environment. My aim was to stick around 5 minute kms for basically as long as possible, which worked well. You can explore the numbers here if thus inclined, but essentially I held a consistent 4.50 – 5 minute per/k pace until 60k, and then drifted between 5 and 6+ until the end.

I enjoyed running with Geoff for 12k, who had done 18 marathons but was about to complete his first 50k ultra. We kept inadvertently speeding up while talking. Another nice man in a Quebec Marathon shirt would always greet me before I passed, picking up who it was from my quick cadence.

Realistically I don’t go into an ultra to ‘race’ – it’s more about pacing my own effort alongside others. I knew Shannon-Leigh and I might be well matched for the women’s title though. She led for some time initially. Around 50k I caught up and at some point lapped her (memory is blurry on details). We had a quick chat. She was pushing through soreness, and wondering whether to withdraw. I mentioned that ultras always have peaks and troughs so things could still turn, which would prove prescient. 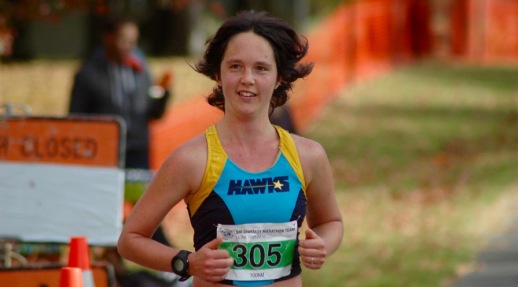 From there, I just got on with my own digging deep as the laps became harder and my legs whined that we didn’t really prepare for this. Around 78k or so I noticed I hadn’t seen Phil lap me for 20-odd kms, meaning he was facing his own challenges. By now I was negotiating the fragile knife edge of remaining resources, taking walk breaks periodically to marshall equilibrium. I have to admit it was a little encouraging to see Phil do this too after he did pass. 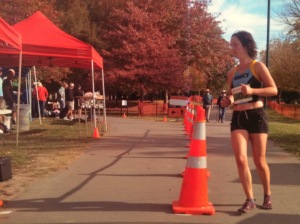 Overall, I felt like the body was less trained than in 2014, but my mental tenacity was stronger. I broke down each 10k in 2, 4, 6, 8, 10, and focussed on something I was grateful for each lap – being alive with working limbs, beautiful trees, helpful people like Geoff and Judy who were helping fill my bottles. There are quotes by Sri Chinmoy around the course. My favourite was:

‘Each sunset is the beginning
Of a very, very bright
And powerful sunrise.’

This one was well placed to kick me out of a walk break. (I figured, egotistically, that Bright Powerful Sunrise could easily be the ninja version of Dawn Tuffery.) 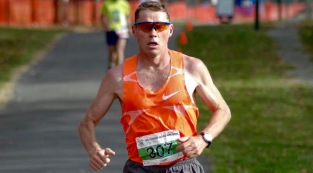 Phil ended up finishing (and winning) in 7.31. At 88k, I got a wee surprise as Shannon-Leigh surged past in an impressive comeback. I knew I was one lap ahead, but fading, and her strong pace seemed like it could be 5 minutes per k to my 6, which would see me caught within 12k. I didn’t have the energy to do much about it though, except keep moving forwards one step at a time. This all livened up the race for spectators, who started timing the splits. She was indeed gaining fast.

My pace vs the hours. Those vertical lines are the walk breaks, AKA the wheels falling off and bouncing away

As it happened, I crossed the line in 8.47, relieved and drained, and Shannon-Leigh came in a mere 6 minutes later. Much kudos to her too – while I didn’t have much energy left to respond with, it was a more exciting – and probably faster – race with us both pushing each other on, and a very equal effort.

It felt wonderful not to be running, as I lay on the grass and looked at clouds. 10 minutes on, I was hobbling around making plans for next time. Three hundys down, and I still feel like I’m just beginning to learn how to run them.

Second win of the day – getting on to podium without falling off. Photo: Shannon-Leigh

I’m now recovering as per this smart article, and have no set plans for my next event. Maybe I’ll even write another post before 2017. Watch this space.