Is it worth writing a novel-like race report 5 months after the fact? Why not, eh. This is my belated-and-then-some rambling account.

Those who know me know I love running, especially if it’s Routes Of Unusual Distance. After having my daughter early 2011, I eased back into running at a sensible pace and indulged in the inaugural Kauri 70k 9 months later. It was great fun (aside from some farcically bad midnight wanderings in the wops trying to find the start). That should suffice for a good while on the ultra front, I thought. It’s not like I’m obsessed.

Then people mentioned Tarawera. The feet started to twitch but the wallet was empty. A competition to win race entry and some Vibram Fivefingers was launched, at which I went OOH and entered, leaving it up to fate, in the shape of Vibram. Fate decreed it was to be! Cue much excitement. 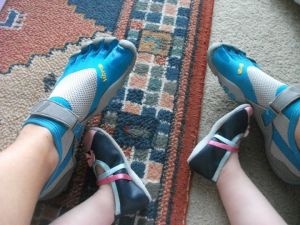 The shoes and socks arrived and it felt like Christmas. Having long been a fan of bare feet grass jogs, I proved an easy convert to the Fivefingers. There may even have been audible whoops of enjoyment on my first attempts skipping between gravel, prickly grass and the glass-scattered tarseal with no problems. Doing 85k in them after 4 weeks training was still a bit of a gamble (and optional) but I was keen to give it a go.

Training overall was a very mixed bag, and 90% behind the stroller. This is potentially good for the core, but bad for the offroad/hill skills. My ‘peak’ running day 5 weeks out consisted of 30 minutes to playgroup in the morning, 2 hours around the river paths, lunch in town, an hour home and 90 minutes after Alba had gone to bed. Less than ideal, but I crossed my fingers that enthusiasm and momentum would see me through.

Come the weekend, we headed to Rotorua for the screening of ‘Unbreakable’, which was excellent. Next day I did lots of running round in the Redwoods with the other Vibram-ers, having a ball sprinting downhill and over obstacles. Some of that footage is here!

Race morning unfolded unusually well. I rolled sleeping Alba over next to me in bed, and she cooperatively had her morning feed while contining to snooze. Final systems check – number, injinjis, fivefingers, gels, pack, plasters, nuuns, water, headlamp, legs? Good to go! I snuck out and jogged to the Redwoods, buzzing with that incomparable pre-race mixture of terror and exhilaration.

The first kms went fast, as I chatted to Kate and Margo and enjoyed the relaxed pace of the bottlenecks. A lot of this section was new to me, so it was all fun. At the first aid station, the level of cheering got me running tall and fast, but not actually remembering to eat. Then water crossings kicked in. I barrelled through, knowing there would be a few. First leg done, check. Feet and legs ok, check.

The hill after Okareka provided a wee reminder that I hadn’t run up any hills since, oh, November, and involved more walking than ideal. It was nice to re-meet and chat with Timothy, who busted out a selection from The Mikado on the run despite his worsening injury. Multi-talented. The lows and highs started to kick in somewhere around here. Reaching the top of the hill – high, stopping for extended pitstop – low.

But Okataina was imminent and the support was a boost. Dylan from Vibram helped me refill the pack (which, incidentally, is the best I’ve tried yet – UltrAspire Surge) and get going again. I’d run the next section twice before and it’s stunning, a riotous rollercoaster playground track amid seriously pretty scenery. This did the trick, and the grumpiness didn’t kick in for another hour or so.

Until it did. There’s a certain fascination in observing one’s own moods during an ultra and the erratic extremes they can get to. In Kauri I’d simply felt pretty positive all the way through just to be out running, and forgotten that the whiny internal monologue existed. Today it was emitting a fairly standard refrain during the tricky bits, reminding me that this was no fun, and a terrible idea, and we weren’t even going to make 9 hours at this slow speed and it was a stupid frickin run, why would you want to do a stupid frickin run, stupid? (Ad finitum.) At which point something went BANG in my calf and I couldn’t walk.

Well, that’ll teach me for worrying about time. At this rate I wasn’t going to make it to the top of the hill, let alone the finish. I sat down for a while and had a quiet freak. After calming down I discovered I could limp uphill backwards, and over the next ten minutes the pain seemed to ease up gradually until I could jog-limp. Somewhere in there was an awesome beach-themed aid station which made me smile amid the self-absorbed grouchiness. 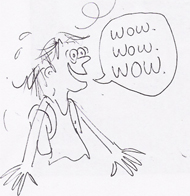 Onwards, upwards, downwards, earthwards. Whenever I was feeling fabulous and sure-footed, a toe-stub faceplant wasn’t far away. Why do we do this again, piped up that internal whine? Perhaps for the awe of seeing the Tarawera falls appear suddenly as you round a corner, or the roaring cascade of water pouring out of the cliff just down the path which prompted another full stop and a fair few involuntary ‘WOW’s. Margo turned up about here, looking great, and did exactly the same thing.

The falls mean an aid station is coming, which means there’s only 25k or so to go! It still took ages to appear. James helped me locate my drop bag and probably bore the brunt of some grumbling. I decided to push on through. 10 minutes later the monologue was in full swing up the never-ending hill, although it seemed to have dropped some vocabulary in the forest (‘stupid race stupid run stupid stupid’). At this point a relay runner strode past me with a huge grin, and said ‘Isn’t this just amazing scenery?’ 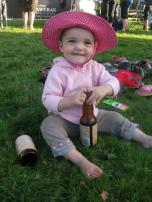 Call these boring pines scenery? You drew the short straw leg, muttered the inside voice. ‘Yeah..’ said my actual voice, and his enthusiasm gradually buoyed me – it WAS a great day to be running in the forest, and I actually wouldn’t want to be doing anything else in the world.

Except maybe giving my a daughter a cuddle. Emotions are on a fine line 65k into a run and thinking about her got me all teary. It didn’t help that I started feeling dizzy, and trying to fix it. More electrolytes? Fewer electrolytes? Caffeine? Sugar? Salt? Pizza? Ginger? Coke? Nothing seemed to really fix it, so I just stood still for a bit if it seemed like I’d fall over.

Before starting, I’d said merrily to Carl: ‘If I feel awesome at the 100k turnoff, do you mind if I just keep going?’ However, excessive awesomeness was not to be an issue. I was very happy not to turn off this time, and very admiring of those who did. The run became a point to point survival mission, in an odd déjà vu from 2010 when I did the second part of the relay limpy. ‘How far?’ I asked one volunteer desperately as the brain fog spells increased. ‘About 8k?’ he said, knocking my hopes. Then seemingly around 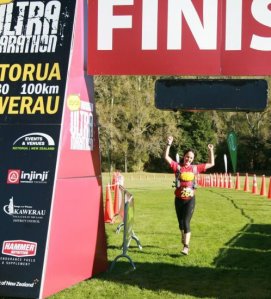 the corner was another aid station, whose volunteer suggested 3k, max. I liked him much more, and might have proposed if I wasn’t already attached.

The bridge appeared, and the fields – not far now. I was going to make it after all. Finish lines are always magic, but they’re especially magic in a challenging ultra. Whanau snuggle! Sitting down! Relief!

I then wandered nonchalently across the field to meet Carl and sort of keeled over. Oops. Gayle and somebody else from Vibram were amazing, rubbing ice all over my body until I regained enough awareness to murmer that this has never happened to me before. What a support team! I hadn’t realise revival was included in the prize.

I’m still not sure what prompted the dizziness and blackout – maybe hydration balance, insufficient training, haywire blood sugar, something out of whack nutritionally or a mysterious combo. It came right anyway. DOMS made the toddler-lugging fun in the following days, and she got a bit less milk for the next 24 hours – prompting a worried 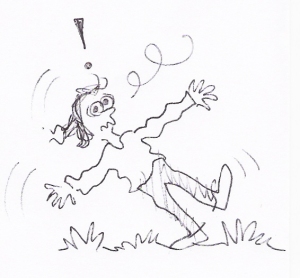 text to a friend that I ‘broke my breasts!’ – but that came right too.

The weird thing is, even after those harder runs that are frequently  – I mean, more challenging, you still get nostalgic writing about it and wish you were doing it all again tomorrow cos it’s SO GREAT. Strange sport. I loved the whole experience that Paul puts on, and being part of the Vibram crew was a blast too. 100k 2013? Why not, eh..

Outside of my little world, lots of really amazing runs happened – see below for some great stories. I stole these links off Paul – hope that’s ok. Although I don’t think Margo’s blog is there, which was one of my favourites. (Anyone?) And here is the famous Facebook group.