Not at the same time! That’d be silly.

I went for a jog tonight at dusk. Nothing excessive – 40 minutes barefoot on grass, slow pace. But it was all by myself, and reminded me just how nice it is to let the legs gently plod-plod-plod while the mind goes glub-glub-glub-gurgle-mmm-CAKE-ooh-look-a-man-with-a-kite! (or whatever). I’m discernibly happier and calmer if I’ve had a run, which Carl can confirm. Endorphins FTW! Runners know all this, but I have a new level of appreciation for those chemicals now amid the joys and challenges of motherhood.

When visiting a neighbour one day last October with me and my daughter in tow, my mum mentioned I’d been for a run that morning. This prompted a truly horrified reaction. “You must stop running immediately if you’re feeding! I fed mine until they were three and never ran a step.”  But it seems to be going fine, I ventured meekly. No dice. “Does the farmer chase the cow around the paddock? No – and there’s a reason.”

As a thoroughly errant cow, I omitted to mention that the morning’s run was a 6 hour hilly marathon, in preparation for a 70k the next month. Some things are best left unsaid. But the neighbour’s concerns aren’t unreasonable, and whether running and breastfeeding can co-exist peacefully is something people often wonder about.

What farmers don’t do.

This made me think I could offer a basic overview of my running and feeding experience to date for interested parties. I can’t advise how it might go for anyone else, but this was us:

Pregnancy itself was very similar to a long ultra, although no running or race has ever made me as tired as I was in the first trimester. Eating for morning sickness is similar to ultras too – frequent high carb comfort food. I ran lots until finding out (circa 5 week mark), very little when throwing up several times a day (from 2-4 months), and then jogged until 6 months or so, when it wasn’t as fun anymore so I just biked places, up until the night before.

I was lucky to have a great birth and wisely restrained myself from running for 5 weeks or so. Our feeding got off to a reasonable start, outside of some jaundice and overactive letdown issues. Pottering barefoot round the field for the first time in months felt tremendously exciting.

Maintaining a decent milk supply if possible was a non-negotiable issue for me. Breastfeeding ticks all the boxes – normal, free, healthy, snuggly, recommended by WHO to 2 years plus; and we’d started off pretty well. If it was obviously affected, running could wait and I’d take up a peaceful hobby like quilling or gardening for a couple of years. An anecdotal survey of some running mums revealed a 4/6 success rate for the combo. OK, not ideal, but worth trying. I started slow and monitored how we went. Initial results were positive. 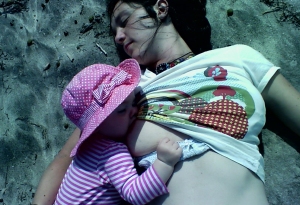 Breastfeeding on cue whenever either of us felt like it was important, particularly either side of a run. Alba is a keen feeder, often drinking plenty at night, which I haven’t always been super excited about but in retrospect it all helped keep the demand-supply equation going well.

I asked my local La Leche League about running too, and they essentially said go for it – just drink lots, monitor her intake and don’t lose too much weight. Eating and drinking plenty seemed to help. For me, running was for head space and fitness rather than weight loss so freely gobbling was ok. Having said that, the extra from pregnancy did all abate gently over 8 months.

The one time running has discernibly affected my milk was Tarawera 85k (see previous post) but that was both understandable and relatively brief.

La Leche League also dug up some research on the lactic acid in the milk thing. Apparently it generally isn’t an issue, and if it is, it’s more likely to occur after fast running. Dang, an excuse to run slow. Alba has never seemed bothered, anyway. Salty, warm, shaken up? Bring it on. ASAP.

My first approach was to wear 3 bras on top of each other, with mixed success. The breakthrough was finding this one which essentially puts everything into lockdown with padlocks (definitely functional rather than sexy). Recommended by Oprah, so it must be good. It’s expensive but still going, so $100 extrapolated over 18 months with no chafing was worth it for me. It opens well for post-run voracious baby refreshments if required but does take ages to do up, and shouldn’t be worn when not running as the compression might affect milk supply. La Leche League has a sport bra too, which I might try soon.

Another fair concern, but I found that adding some proper physical fatigue to my exhaustion was a positive, especially if it comes with fresh air and scenery. Plus running itself can be energising.

I can’t offer much personal insight into this one really. It was something I considered though, and addressed by paying very careful attention to my body and stopping for a while if something felt dubious. I may be a ticking ligament time bomb about to dissolve into a floppy mess but they seem fine for now. Taking it slow is very important.

We were really lucky to be given a second-hand Mountain Buggy which has been brilliant for runs and baby-sleeping – two birds with one… run. I have my water and snacks in the buggy and can stop any time for a breastfeed. Otherwise, I just keep a beady eye out for opportunities. 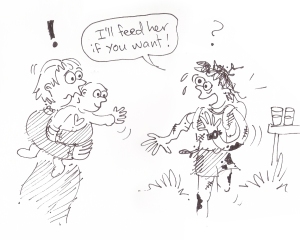 Back to that first post-birth marathon. It was Waihi Xterra 42k, and had gone reasonably well, although I’d definitely felt the lack of training and underestimated the terrain. When coming back through the start area after a couple of hours, I deliriously called out ‘I can feed her if you want!’, before realising I was addressing the wrong baby and parent. Not embarrassing at all, then. After 5 hours or so coming round the (fricken never-ending) mountain, I panicked that I hadn’t left enough expressed milk, and tore down at high speed. Aid station volunteers en route: “Is everything ok?’ Me (wailing): “No! MY BABY! I have to FEED MY BABY!” It turned out she was perfectly content. That reminds me of another question that’s asked though:

You’d think so, but I haven’t found it an issue. One letdown over 6 hours in that race wasn’t obvious to anyone else, and it hasn’t happened since on the run. I think it’s because the supply and demand aspect got more effective after 6 months, so milk isn’t produced unless it’s asked for.

Dragging poor child out in her sleeping bag.

The 70k following the marathon was the inaugural Kauri ultra. Alba would be 9 months old. I was super short on long runs, as a spate of flu and general life had interfered, and the Waihi marathon was the only run I’d done over 2 hours. But hey, it’ll be fun. This time I saved up expressed milk like crazy, and left a ridiculous amount in a cooler. She only drank about 2% of it, but at least I was worry-free and we both had a great day.

We’re now 19 months into this experiment and going strong on both fronts (so to speak). I’m not back to where I was in a competitive sense (but wouldn’t be far off if it wasn’t for that damn chicken pox).

In summary, this experiment has been successful thanks primarily to: